I’m Glad I’m Me, Weaving the Thread of Love from Generation to Generation

Beyond the Book with Julie Chan
January 4, 2021
Author of “I’m Glad I’m Me”…a children’s book but really for anyone alive to be reminded of their importance and to share the words I Love You! Sheila shares about the event that inspired the book. She also shares about the work she has done reading to children, giving this book to millions, starting an alliance to overcome child abuse and the personal event that helped shape her life. Sheila is an angel on earths den reminding us all the gift of saying I Love You!
See interview » 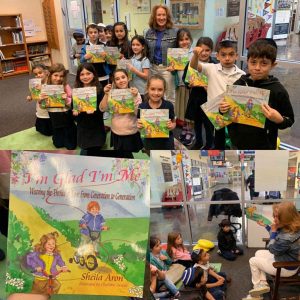 Students in EC4 through 3rd grade were excited to have author Sheila Aron come read her book I’m Glad I’m Me. All of the students were given a copy of the book to take home and share with their families. The book teaches the language of love to everyone, regardless of age.

Sheila Aron: Ending the Cycle of Child Abuse »
By Sara G. Stephens
January 31, 2018
A native Houstonian, Sheila is an author and founder of The Thread Alliance, an organization driven to help victims of child abuse and put an end to the cycle of this social malady. She believes that if only one child is being abused, that is one child too many.
Houston Family Magazine »
February 2018, Digital Version, Page 42 » Sheila Aron, the founder of The Thread Alliance, was named one of FamilyTime’s 2017 Women of Achievement Award honorees in the category of human services.

The Women of Achievement Award winners were honored at the FamilyTime’s Heart of Gold Gala which was held on Saturday, January 20, 2018 from 5:30-11 p.m. at the Hyatt Regency Houston.

FamilyTime is a non-profit organization that provides services and programs to encourage the mental health and wellness of the community as well as promote safety and support for the prevention of domestic and sexual violence.

Author Sheila Aron Donates Books to Local Children’s Organizations and Hospitals »
HOUSTON (December 11, 2017) – Sheila Aron, author of “I’m Glad I’m Me: Weaving The Thread of Love From Generation to Generation” and founder of The Thread Alliance, a non-profit dedicated to ending the cycle of child abuse, is spreading holiday cheer by donating her book to the children and families supported by 11 local children’s organizations and hospitals. (Read more »)
The Katy News »